37/ A Bit More about Target Classification

I’ve mentioned target classification briefly in previous books—the process whereby objects are grouped within the strata based upon their weight and density. While I’ve always known this to be true–I didn’t know just how so–and how dramatically it affects your chances of finding some gold.  I also recognized that there are different levels or degrees of classification.  By this I mean that at some locations pretty well all targets are available–this may be post-storm with everything stirred up or the result of a shallow base–gravel or coral just below the surface.  The other extreme (like Wasaga Beach) is a location where winter storms, and dramatic season to season changes make for the extreme classification of objects.  This means that heavy targets are very deep and a lot of the time, only the lightest objects that are moved by the current are within detecting range.  It’s important to remember also that anomalies (a few heavy surface finds) do not make a rule.  As a rule, under these conditions, only the very lowest ground is worth hunting most of the time.  Sure, during on-season there are “fresh drops” but with high gold prices, these are fewer now.  More typically during the rest of the year (you may be fortunate enough to hunt somewhere with big swimmer numbers in the water year round) you are at the mercy of the site grades and sand conditions.  When I began to accept this fact– and stopped hoping that some lunker chain would levitate to the surface of the sand–my finds took off.    In a four week period, I found four and a half ounces of gold.  This all came from the most heavily hunted section of ground in Canada—worked almost daily by locals.  You could say that I began to concentrate on where the gold was–not where I hoped it would be.  When you learn to do this, physics–gravity becomes your ally instead of your enemy.

It’s important to remember that all sites classify–not just those with big waves coming in.  The gentle, relentless movement of the water jostles the sand–forcing heavier objects deep and grouping them horizontally.   The extreme comparative density of gold makes it sink in any kind of sand.  It stays down at marl (base) level until a major storm either moves it or it’s uncovered by grade changes.  These changes have definite features and pre-indicators that can be recognized with practice.  This is where your general experience of hunting a location comes in.  All of your other observations key on your understanding of the general grade–that is when you have found heavy targets before–how far down have they been?  How far from shore?

You could liken this to a mental line that you draw from shore–going out and sloping downwards.  When you know the angle that this line proceeds on–half the job is done.   Everything else follows from this understanding of the overall grade. 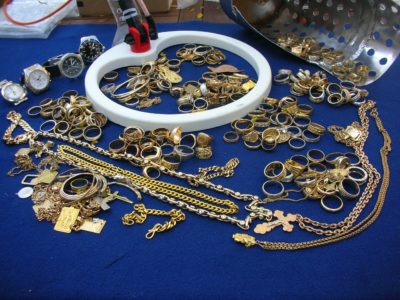 Some keeper gold and watch finds from the last 10 years or so.