As touched upon above–some sites just need to be covered.  The trade-off here is that the large coils which cover ground best, are usually heavy, and exhausting to drag though the water or swing.  With proper preparation (stretching beforehand, using a back brace, frequent breaks…) it can be done though.

It’s worth noting here though that coverage need not just mean searching great tracts of land.  The most effective coverage can often just be running one pattern over a small section again and again.  This is something a top pro taught me.  He measures his hunts not by how much ground he’s covered but by how much time he has put in at a location.  This may involve searching one line ten times over.    I don’t mind admitting that this guy has out-hunted me many, many times by doing this.

This lesson was made crystal clear to me on one hunt where I did my usual “three passes across “ in the deep section and concluded that there was nothing there.  My buddy Roland put six or eight rows along the same lines and found this massive 195 gram silver chain.  (See picture below). 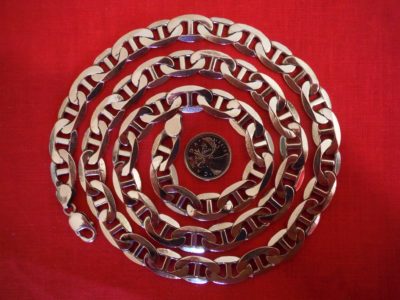 Putting in multiple rows along the same deep water-line got my buddy Roland this massive 195 gram chain that I missed. (Scale coin is a quarter).

When I tell him that I didn’t find anything at a site (having given it my most thorough grid-type coverage) he says: “…you need to pass more time there…!”    This is because (as I’ve begrudgingly learned), complete coverage is a myth.  Coil control lapses, target inclination, ground changes–all of these adverse factors will never let you get everything.

It’s important to be aware of the trade off that comes with your choice of coils.  Whereas a smaller coil may give better audio and penetration in the interference zones, the reduced coverage may cause you to miss targets, lateraly, or to have to do multiple passes on the same section to accomplish the same level of complete coverage.   I once hunted for a lost small ring with my Barracuda that has an 8” coil.   I was given very accurate directions as to where the ring has been lost– a 10′ x 30′ square.  Even still it took over an hour to find.

It’s also important to remember  that at some sites, the activity is very localized.  At this  type of place, coverage won’t help you that much.  There is a seasonality to this kind of decision-making too in that during the peak on-season, more area of a   beach will be used.  When you get to the off season, only the busiest main sections will be worth working.

From: “Water Hunting: Secrets of the Pros Vol. 2”