Book Excerpt: “Developing Your Accuracy with the CTX 3030”

Where there is not so much trash, open screen “audio methods” are more common. The idea is to examine a “composite” of a response’s features: consistency, tone, whether or not the cursor position is stable, target trace, and cross-sweep information. As a long time “reverse” hunter (acquiring signals in all metal and then checking them in discriminate) I especially like the way that the CTX interface is laid out for this type of approach. Alternately, you can set up the “User” button to bring in two more discriminate patterns to examine a response. To do this, press the “User Button” at the far right of the panel. Then go down two presses to “Previous Mode” and select. You may need to make sure that a second program has been used since you last shut down. Then you will be able to move back and forth between the two.

A large number of CTX hunters make their dig decision from the open screen information.

I’ll say this however: With a multi frequency machine like the CTX, a lot of target information is gathered. Much of this is what I’ll call “fringe” information—that is–information that represents how the target relates to the surrounding ground, mineralization, salt, ground contours and nearby iron. When you hear a signal in open screen—much more of this information is reported in the audio. When you go over to a closed screen pattern, what remains is a tighter, more muted signal. There’s a lot to be learned from this difference. Basically, when a target sounds good in open screen, it’s more likely to be good. Where you have part of that response blocked off, it’s bound to sound better. If there’s one method that’s helped me to stay off falses—especially in iron or where there are mixed targets such as bottlecaps, it’s been going back and forth between open and closed discriminate patterns. This is also evident at the beach where many responses sound “only half there”—muted, weak and broken. These will be the bottlecaps—ferrous steel and non ferrous tin or aluminum—with only the good half trying to report. Basically the CTX is splitting the target in two—and reporting the more consistent half. So you have two models:

1/ In Open Screen the entire target is heard—likely to be a rougher, more varied audio response with a more scattered “Smartfind” screen response—a bouncing cursor. (The exception would be a clean solid target such as gold or silver).

2/ In discriminate (Preset Beach P1 for example), you have a much better sounding signal as all of the other less consistent parts of the response will be knocked out. This is true even if these “bad” parts constitute most of the response. This can be deceptive and result in a lot of unnecessary digging.

In several of my previous books I’ve tried to explain how many types of signals are “connected” (electrically speaking) to the ground. I term these “Infinite High and Infinite Low” responses. These would be those targets that are more similar to the ground—either at the bottom (such as small, decaying foil or tin) or at the top—such as big iron or something that overwhelms the discriminate circuit at its uppermost range. These will be the targets that alternating open / closed screen signal testing will reveal. So when you hear a louder, stronger sound when you switch to open screen, you know that in discriminate–only part of the signal was being heard—its part iron. Again, this is why target sizing is so critical with the CTX. In open screen you are hearing all the parts of a target that would be knocked out with a few coil passes—“boiled down” to the closed screen initial pass (es) version.

These will usually be those responses that are some distance off the “12 line”. This is an especially effective way of determining big iron or spikes that are mimicking a deep coin. The “High Trash” separation mode is especially effective at showing iron targets up by displaying a cursor that’s off the “12” line. As well, this mode only sounds off on targets that are within the discriminate accept pattern—an added check to incorporate as a second mode by way of the ”User” button “Last Mode” feature.

Another, simple basic “tell” for CTX falses is a jumping cursor. It’s worth noting here there that coil control plays a role here in that a wide sweep may be getting more than one object. I’ve seen hunters take the time to use the cross sweep (in “Sizing Pinpoint) so as to determine which way (North / South / East West with North being the far edge of your coil) a spike was sitting by listening for the double tone. (See “Sube” below). From there they are much better able to determine if there are any other responses present by using Target Trace and repeated coil passes.

Put simply, there are things that no detector is “immune” to. The more high gain sensitivity that you want to put into the ground to bring up signals, the more will be the possibility of iron objects mimicking deep coins. In addition to the basic “In Keeping” type methods detailed above the most basic test is probably the most effective—switch to Automatic Sensitivity or turn the Sensitivity down and re-check the signal. If it’s a lot weaker or is now broken—probably iron.

I think that this is an important thing to realize with the CTX. As with any detector, some iron objects, by their size and conductive features will mimic non-ferrous targets. The FE reading will usually show these as FE “35” but what’s to be learned here is that there is still a paralleling of the two indices—that they are not mutually exclusive. So with some alloyed targets you get the “split” such as with a bottlecap—the machine is trying to read two sets of characteristics at once—ferrous and non-ferrous. With others you get a straight “bleed” where ferrous shows up as non-ferrous. Besides the FE reading, and the Target Trace pattern the obvious test for these is the good old wide or narrow determination. Rather than being some defect in the machine, these “falses” and “bleeds” teach us about how all detectors separate ground from targets and iron from good metal.

From: “Finding Gold, Silver and Coins with the Minelab CTX 3030” 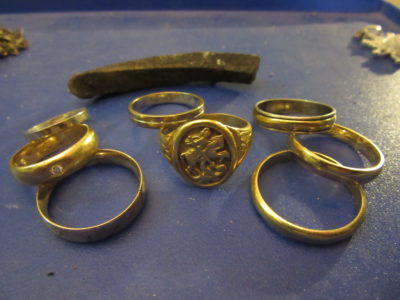 A couple of good hunts with the CTX 3030