Book Excerpt: “A Function of the Numbers”

6/ A “Function of the Numbers“

Large numbers of people always increase your odds of finding something of value.  These numbers can be in the form of day-to-day crowds or cumulative–the result of usage over time.  At my local beach there is rarely much jewelry to be found.  However around mid July we have several of what we call “overflow” days with exceptionally large crowds and beachgoers sitting in areas that are generally unused.  These dozen or so days replenish the coin supply for the entire season, and because the numbers are sufficient, virtually all the gold jewelry that is found throughout the year is lost then.  Its almost mathematical–the same every year with only one explanation–it’s a “function of the numbers!”  While this applies specifically to beach and shoreline hunting, it’s an important principle–always look for the center of where people congregate.   If there are three words that I can say to a newer hunter on the subject of “site-reading” they are: main, main and main–always look for what is main.”  My experience from years of detecting specifically for jewelry has taught me the importance of recognizing this prime ground.  I also believe in what’s called the “big find theory” which states; “Because there is more likelihood of any valuable item being lost in the busiest section of a site, there is an even greater likelihood of an extremely valuable object being lost there as well. ”  It just makes sense that the least frequent event will occur at the most likely spot.  No doubt any Las Vegas odds maker would agree.

Where you have locations that have produced before, there are often antecedent factors that will alert you to the fact that sufficient numbers are present.  For example, I notice that for a season to have good beach hunting, there needs to be a string of hot days, rather than just a few here and there.  This gets people into the habit of going to the shore.   There may also be other indicators–such as how many coins there are to be found in a particular area.  While this idea of “guesstimating” is discussed more thoroughly in my previous book ”Water Hunting: Secrets of the Pros”  (Digdigdig Publications, 2005) it is important to mention that where you do see a history of items being lost or found, the pattern is likely to repeat.  Some of the best site advice I can give is to “always defer to the tried and true,” and this usually involves following the numbers.

While more will be said about this later, one way to learn more about what makes up a good detecting site is to compare them. Often you will see sections of the same beach or park that seem identical but one will be good hunting and the other terrible.  I mention this here because it highlights the importance of numbers, in that usually the difference between these locations can be traced to numbers–do people go to that location and stay?   A glance may reveal evenly distributed crowds, but one section may be more of a transit route where people do not spend any time.  Look for those locations where people are actually going. 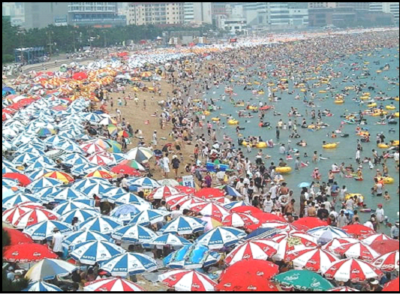 Massive numbers such as on this Korean beach usually mean treasure, but there are other considerations that need to be examined to determine a site’s potential.

From: “Site-Reading for Gold and Silver” by Clive James Clynick