Book Excerpt: “Do What Others Won’t, or Can’t”

This is an idea I’ve heard expressed by several top hunters.  The trick is figuring out what that is.  As the example below will illustrate, rather than just being discouraged by the presence of other hunters, it’s important to try and observe just what they are doing and how effective they are.  The real test is being able to respond accurately.  This may involve detecting deeper, working with more accuracy, hunting deeper water, putting in time at the edge, working in coral or rocks—any number of things.  This is where versatility comes in.   Several top hunters I know take this a step further and own hookah rigs for extreme deep water, (even dredges for super prime areas), and drysuits for cold weather  hunting to take advantage of winter storms.   Conversely, you may at some point find that others are doing what you won’t or can’t.  This is where experience, skill and site knowledge come into play.  It might not be the hardest way of hunting that works, just the one that’s accurate for the conditions.   Even the type of scoop you choose the use can be a big advantage.  I’ve gone into areas of heavily worked sites that had river stones.  Because of my scoop’s “Euro-Point” I was the only one able to dig and found several gold rings that way.  As well recently, many of my best, heaviest ring finds came from holes that others had made in poor dig attempts or digs that also contained a few bobby pins.  Sometimes doing “what others won’t or can’t” simply involves re-checking the hole.  This is especially true in rough surf environments where heavy targets will often be moved–and come to rest together. 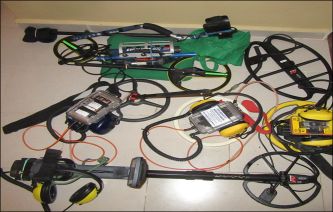 Running multiple machines give you greater versatility.  I’ve never owned a detector that didn’t more or less pay for itself sooner or later!

The concept of “trash tolerance” is also important here in that it’s the mark of an experienced hunter to know when to “turn this ability on” and when to cover ground more quickly just to get an idea of what the conditions are like.   Anyone can dig for hours—the key is knowing when to decide that it’s worthwhile to do so.

One Caribbean site I hunt comes to mind.  There is a sloped edge into the water that’s composed of very soft sand.  While it doesn’t’ change that much, the hotel is expensive and the guests have a lot of expensive, heavy gold.  Although the beach is hunted frequently, none of the locals understands the conditions.  A slow, methodical pulse hunt on this soft slope always gets a few heavy 18k rings that are too deep for VLF (or even unaware pulse hunters).   My point is that when you fully understand the conditions there are often a lot of obvious opportunities for you that others miss.