One thing that’s helped me to understand this detector is learning what it won’t do.  When you hope to acquire and identify the smallest, weakest signal out there –in the worst, most inconsistent environment, having this mental “benchmark” is a handy tool.  Of necessity, in winter–I bench test detectors in my basement.  Like all basements mine has a furnace and a power panel.  While the CTX doesn’t do well near these two EMI sources, –it still detects targets.  How it falters and responds to over-use of the Sensitivity control is a great teacher–instructing me on what to expect from this machine in rough salt water or black sand.  As was suggested as an experiment in chapter 2, (with lowered Sensitivity) turn the machine on near a television or in your living room.  This noise is the same noise that needs to be mediated in the field.  Those faint–masked-by-interference targets sounds are the same ones that need to be listened for in rough surf.

Similarly, going from a quiet Auto Sens setting to Manual is the way to get more depth–but at the expense of operating with a lot more difficulty–hearing through noise and false responses.   The more practice you have at this–the easier it becomes and the less likely you will need to depend upon Auto.

This principle also applies to running the 17” coil and I’ve noticed what a good “teacher” it is in that when you go back to the stock coil after using it the smaller coil now seems quiet (and light)–and easy to run “up high.”

Targets can also act as “teachers.”  Just as with a pulse–when you are forced to work in an environment which is full of nails–it’s surprising how quickly you learn to listen for round sounds.  With the CTX, those who want to learn to work in pure open screen have to really “train their ears” to ignore a lot of noise.

“Partial” responses and “cross-feeds” also teach you a lot about the CTX.  These signals show you how the FE metric cannot be accurately captured with existing technology (although it’s being claimed by Minelab that the new Equinox’s “IQ” platform does just

With a CTX closed screen like the Desanto program–notice how many responses that are well outside of the accept “box” sound off anyhow.  This gives you a good look at how even a sophisticated machine like the CTX struggles to identify targets.

When you open the screen up, these partial responses require several coil passes to be knocked out. 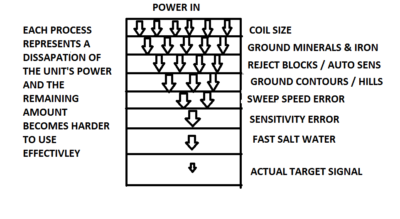