I find most of my stuff going in behind hunter who want to speed things up by relying on discriminate mode. The reason for this is because I’ve learned that any discriminate feature is basically at the mercy of conditions.  For example, there just isn’t a machine made that can consistently pick out a gold object in black sand.

Another site feature that affects accuracy is changing moisture levels.  I’ve heard several seasoned detectorists say that their “secret weapon” at “hunted out” sites is to work them a set number of days after a rain storm.  This also works in reverse in that moisture or dryness can obscure targets.

There is also the problem of multiple targets under the coil.  While there now machines (the Minelab CTX 3030) that have the ability to trace and identify multiple objects at once, most machines lose accuracy in dense junk.  I’m currently following the Internet posts of a hunter who is working an excellent site but can’t find anything because the machine he is using won’t separate through the multiple nails.   When he tries a small coil, the depth is not enough to reach down to where the gold is.

Sweep error is also a bar to discrimination.  This is something that becomes obvious when you use a pulse machine.  Many of the targets you find are not deep at all but have simply been missed by VLF hunters who overran them working in discriminate.

When considering whether or not to use discriminate, it’s important to understand just how much interference there is in the ground and how it affects detector accuracy.  This interference can come from hills and contours, changes ground’s composition, fast current or the depth of water.

Target position or inclination is another factor.  While big, high conductive coins may be easy to detect, small low conductivity responses like gold are much more likely to be missed because they are sitting upended. 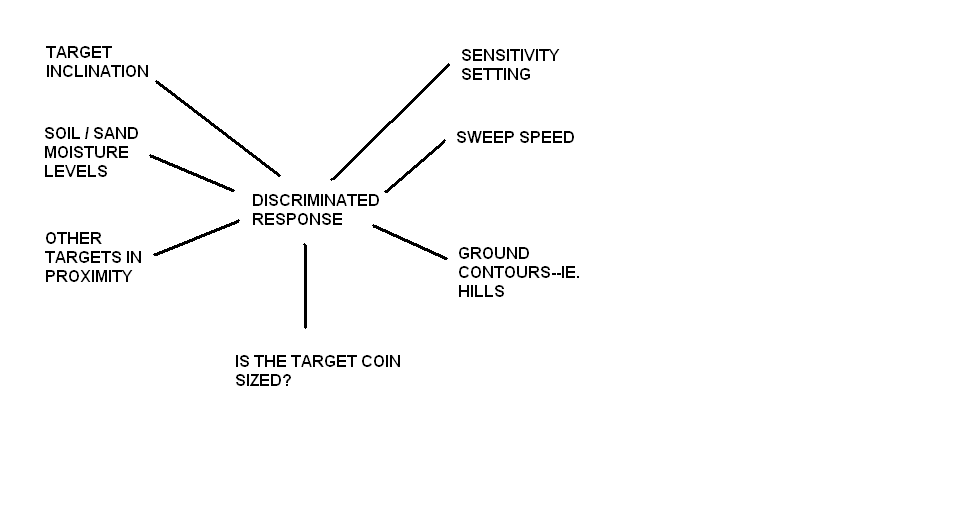 Detector discrimination of any kind is a useful tool for eliminating problem targets but can’t always be relied on to accurately report what is in the ground.